Exposure to Agent Orange by Location 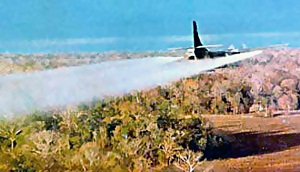 Part of the United States' strategy in Vietnam was to conduct an herbicide program to remove foliage providing cover for the enemy. Agent Orange was the most widely used of the herbicide combinations sprayed.

Agent Orange and other herbicides used in Vietnam were tested or stored elsewhere, including some military bases in the United States.