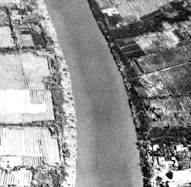 Agent Orange is a blend of tactical herbicides the U.S. military sprayed from 1962 to 1971 during Operation Ranch Hand in the Vietnam War to remove trees and dense tropical foliage that provided enemy cover.

More than 19 million gallons of various “rainbow” herbicide combinations were sprayed, but Agent Orange was the combination the U.S. military used most often. The name “Agent Orange” came from the orange identifying stripe used on the 55-gallon drums in which it was stored.

Heavy sprayed areas included forests near the demarcation zone, forests at the junction of the borders of Cambodia, Laos, and South Vietnam, and mangroves on the southernmost peninsula of Vietnam and along shipping channels southeast of Saigon.

The U.S. Department of Defense developed these tactical herbicides specifically to be used in “combat operations.” They were not commercial grade herbicides purchased from chemical companies and sent to Vietnam. Tactical herbicides also were used, tested, and stored in areas outside of Vietnam.

Learn how Veterans may have been exposed to Agent Orange and other herbicides during military service, including outside Vietnam.

The dioxin TCDD was an unwanted byproduct of herbicide production. Dioxins are pollutants that are released into the environment by burning waste, diesel exhaust, chemical manufacturing, and other processes. TCDD is the most toxic of the dioxins, and is classified as a human carcinogen by the Environmental Protection Agency.

Agent Orange dries quickly after spraying and breaks down within hours to days when exposed to sunlight (if not bound chemically to a biological surface such as soil, leaves and grass) and is no longer harmful.

For more information on TCDD, read the fact sheet on chlorinated dibenzo-p-dioxins (63 KB, PDF) from the Agency for Toxic Substances and Disease.